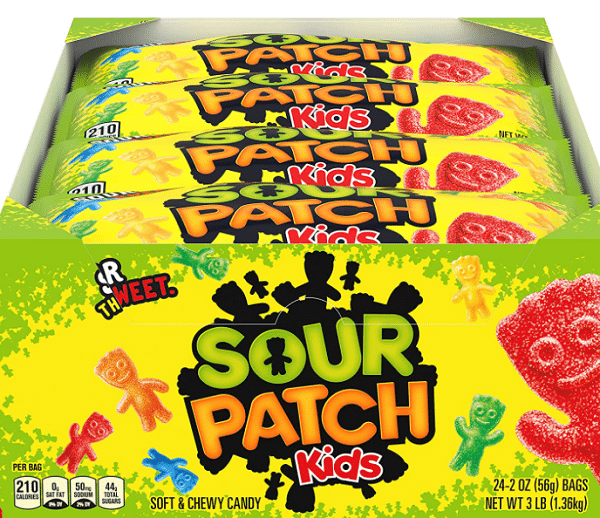 Are Sour Patch Kids Vegan – A Quick Guide for you today!

Sour candies are some of the most favored candies in the world. Sure, sweet candies are great, but sour candies really get your taste buds tingling. The biggest shame is that so many of these sour candies just aren’t vegan!

What about sour patch kids? These are one of the most popular sour candies. They have a sour exterior and a sweet center. Yum! But, are they vegan? Are they not a vegan candy, or do are they perhaps vegan, but it depends on how hardcore vegan you are?

We are here to answer this question for you, are sour patch vegan?

Let’s take a look at the ingredients that can be found in every form of sour patch kids first, as ingredients are the most important factor for anyone who is vegan.

Any candy will contain some form of natural or artificial flavoring. Natural flavors can come from either plants or animals, however, candied flavors usually come from plants, so this is okay. If a flavor comes from an animal, then this will be highlighted on the packaging.

Colors are another thing we need to consider. Food coloring is quite controversial for vegans. Food colors are often tested on animals, although many companies are trying to stop this, there are still many out there who do.

See More – How To Know If Something Is Vegan?

We will assume, therefore, that these food colorings are vegan unless the packaging would state otherwise. Always check for ‘carmine’ on the packaging.

Does Sour Patch Kids Have Gelatin?

Sour patch kids do not contain gelatin, they instead are bound with corn starch instead.

Sour Patch Kids are gluten-free. No ingredients listed in the making of this tasty treat are gluten or gluten-based. However, the Sour Punch Straws are not gluten-free, as they include gluten-based wheat flour. 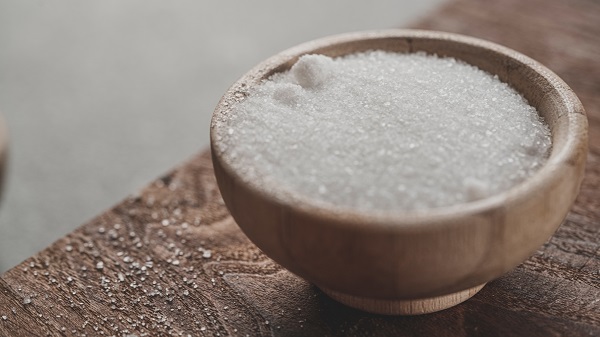 We have to mention sugar. When we ask are US sour patch vegan, we have to remember that all US candies are well known for being high in sugar.

Why does this matter?

Sugar is another controversial product for many vegans because refined sugar cane is usually manufactured and processed with bone char to achieve the white color it is known for.

Sugar does not actually contain any particles from this, but due to this being done, it is not vegan.

If you do avoid non-vegan sugars, then pretty much every sour patch product is not vegan. 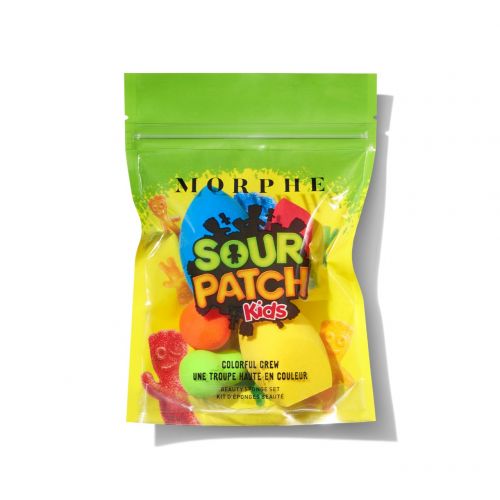 Sour patch candies are free of gelatin. Why is this important? Well, gelatin is the primary non-vegan ingredient you can find in candy.

That’s not all, though. Sour patch kids also do not include gluten either, and technically they do not contain any animal by-products.

But, there’s a catch: the sugar in sour patch kids may make it taste great, but it is processed with bone char, so for many vegans, this makes it a no-go zone.

Also, not every sour patch is made the same. While the only danger for mainstream sour patch kids is in the sugar, for other sour patch products there are more non-vegan ingredients.

Let’s look at the sour patch products in the US that we want to highlight the most, with these concerns.

Are Sour Patch Kids Vegan In The US?

It might sound strange, but while you can get sour patch products all over the world, the US has the most of them.

While hypothetically we could say that yes sour patch kids, as in the main form of this candy, are vegan if you are not concerned about the processing of the sugar, we have to say no otherwise.

It really depends on how strict your vegan diet is.

Overall, PETA does list them as being vegan friendly, due to the ingredients being from plant sources.

How can you actually use this?

Really, the decision is up to you as to whether you would feel comfortable eating them.

However, to delve into this more, we will look at the different sour patch kids we think are the most worth considering.

While we will say that standard ‘original’ sour patch kids are vegan, the brand as a whole is not. Here is why… 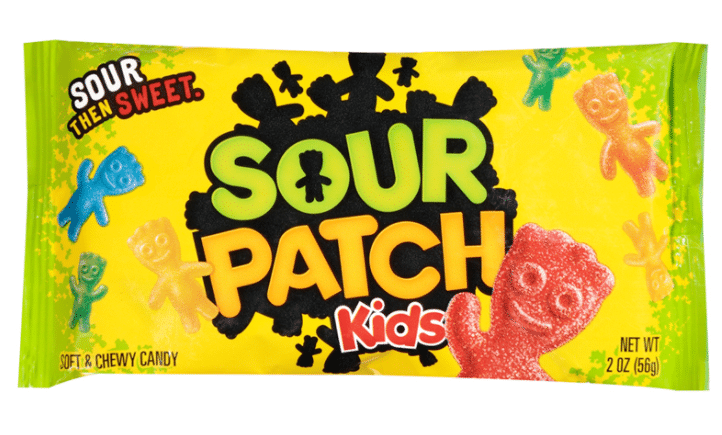 There are three main types of sour patch tasty treats we want to look at here.

So, are sour patch watermelon vegan? Well, aside from the additional Titanium Dioxide, these are just the same ingredients as found in normal sour patch kids.

Titanium Dioxide is nothing to worry about, it is a naturally occurring mineral in the earth, and it is vegan friendly and non-dangerous. So, sour patch watermelon is indeed vegan friendly (depending on your views on the sugar processing).

So, lime sour patch kids, are they vegan?

Generally, Lime Sour Patch Kids Gum is vegan, however, the gum base makes this questionable. For many brands gum base is lanolin which is a secretion that comes from sheep’s skin.

However, some gum bases are vegan. It really depends on the gum base, and we do not know which gum base they use.

So, are sour patch straws vegan? Well, yes technically. They do have one ingredient that could come from an animal or plant, which is Glycerin. However, it has been confirmed that this is usually sourced from plants in food.

This would mean that they can be vegan. However, once again, it depends on how strict your vegan diet is. While it is typically sourced from plants, if you are the cautious type, you may want to avoid this.

However, if you are cautious of this, you are likely also cautious of the sugar processing too, which would make all sour patch kids non-vegan for your diet.

Why Are Sour Patch Kids Not Vegan? 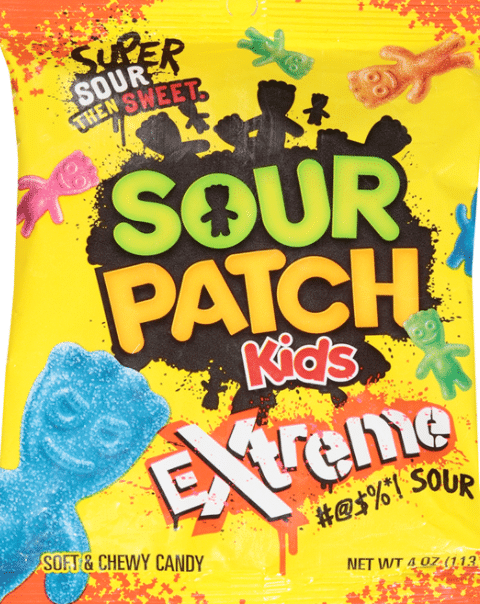 Here’s the deal, in some regards, Sour Patch Kids are vegan. However, the sugar dictates how vegan they are questionable.

The main factor in deciding if Sour Patch Kids are vegan or not is you.

The specifics of your diet are what will define how vegan these tasty treats are.

A couple more points on why this is important…

There are some people that still say sour patch kids are vegan, however, they are not. If you get a non-vegan friend to eat a candy such as Haribo which is made with gelatin and then sour patch kids, they will notice the difference in texture. This is due to them not containing gelatin.

Luckily, sour punch straws are indeed certified as kosher candy. So, you can eat as many as you like. (Although your dentist may not agree with that.)

It depends on how strict you are with your diet. However, we will say no due to the bone char in the sugar processing process. Bone char is 100% not vegan, and although there is no trace of it in the final product. It is still included in the process of making it.

We will say that sour patch candy is not vegan, however, feel free to make your own verdict based on your preferences.

Q. Does Sour Patch Have Pork?

Sour patch candy does not contain any pork. They are made with corn starch instead of gelatin. Gelatin is unfortunately made from different parts of cows and pigs. Luckily it is not included in sour patch products, instead they decided to use corn starch, something we can all get behind! 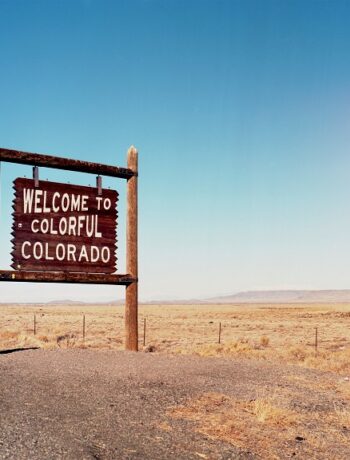 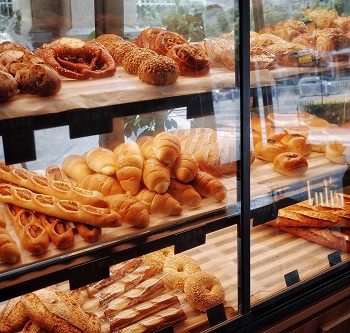 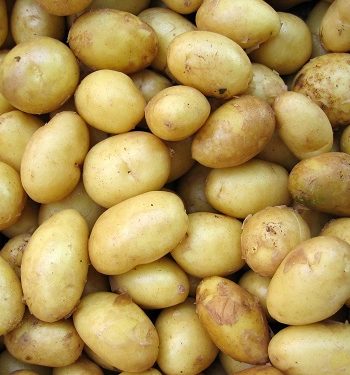